Lesbian, gay, bisexual and transsexual rights are almost non-existent in Pakistan. Certain sexual activities are still punishable by life imprisonment, and same-sex relationships are harshly shunned. But one film has made an attempt to address the society’s attitude towards this.

Bol (2011), directed by Shaoib Mansoor, is a courageous film about a girl on death row. She tells her sorrowful story to the crowd before she dies, and unravels every piece of Pakistan’s social tapestry and it’s problems.

The film addresses many of the social issues in Pakistan, including capital punishment, domestic abuse, misogyny and honour-killing. The heart-wrenching plot includes the struggle of Saifi, a young eunuch coming to terms with his identity in a country where it is still taboo to be homosexual.

The actor who played Saifi talks about his role as a eunuch:

Another brave director Sharmeen Obaid-Chinoy, co-director of the award-winning documentary Saving Face, has addressed LGBT rights in her Channel 4 documentary Transgenders: Pakistan’s Open Secret. Disowned by their families, begging on the street and heckled by society, the film shows the lives of this alienated group in Pakistan.

With my mental bar for a good documentary set rather high, (partially down to my lecturer David) I will always have criticisms of my own work. But I am now ready to share this documentary with you all. Constraints regarding the duration of the film having to be 15 minutes did mean many things were compromised, including the depth and details of each issue covered. Please give feedback by commenting on my blog or on YouTube, and if anybody does deem it worthy or more eyes, please share it or tweet it #BeneathTheSurface via @jodylan89.

In case anyone missed previous posts about the documentary’s topic, read ‘Initial thoughts on HK’s ethnic relations‘ and ‘Hong Kong: Racism or Ignorance?’

And a big THANK YOU to everybody who helped me make this in small ways or big.

We started, as all visitors do, by taking off our shoes and covering our heads. For those who don’t usually wear turbans or a scarf, there are spare ones provided. As we followed the grandiose staircase upwards, the Sikh’s holy book, the Guru Granth Sahib, housed under a golden canopy, came into view. After bowing in respect and sitting for a while to take in the sweet sounds of the holy book being sung aloud.

Gurdwaras, or Sikh temples, practice their service to Humanity by providing this free, round-the-clock kitchen. People of any race or religion are welcomed to eat Langar, which consists of solely vegetarian food, while sitting on the floor with everybody else. This dining style was introduced by the Sikh founder Guru Nanak Dev Ji as a symbol of everyone’s equality, a theme that is resonant throughout the Sikh Faith.

The whole system, from food preparation to cleaning up, is run by volunteers who offer their help and service selflessly. This is what in Sikhism is called Sewa. And those who give Sewa are Sewadars. The most warming part of this is that they don’t expect anything in return. As Gurdeep Singh took us on a tour around the kitchen, we watched as women tossed and beat dough into round, flat shapes to make chapatis. At the next table, men were leaning over a burning hot-plate, flipping the flattened dough until it was slightly browned.

Sewadars like Gurdeep Singh devote time to serving Langar almost every day. Preparing the dishes, which range from daal (lentils) to kheer (semolina), starts at 2 in the morning in order to feed hungry mouths by 5 a.m. In a continuous cycle throughout the day, trays are taken, filled and emptied by visiting worshippers, and given to another group of Sewadars who are in charge of washing up. By 9 or 10 at night, the kitchen is sparkling clean again, ready for another day of hard work to begin again in a few hours time. 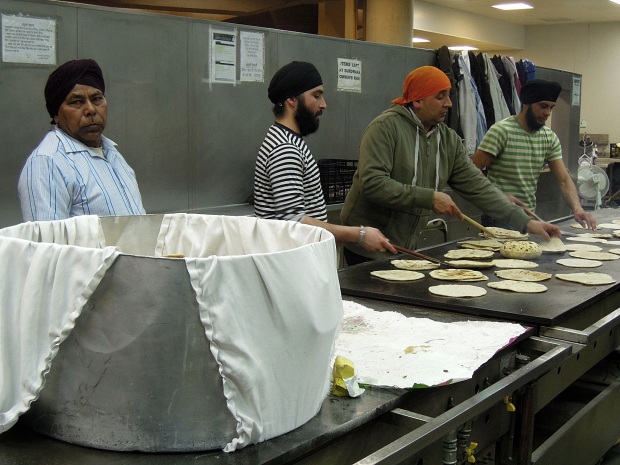 The day that the Gurdwara is pulsing with energy and life is on a Sunday. The Sewadars, along with the the Chefs, feed from 5,000 to 10,000 people on this one day. We stood in the fridge among gallons upon gallons of milk that would all be used in one day to make kheer.

After a long day, we took a metal tray from the pile. A ladel-full of daal, vegetable curry and kheer was added to our tray as we moved along. We were also offered chapatis, masala tea and jalebi, a sweet battered pretzel doused in syrup. As we sat and ate this delicious meal, the Gurbani, or devotional songs, played continuously, echoing throughout the spacious rooms, soothing the soul.

Southall is home to the grand, awe-inspiring Sri Guru Singh Sabha Gurdwara. But this isn’t the only place in London you can join this community experience. Upton Park and Southfields are also home to major Gurdwaras, as well as the oldest Gurdwara in Europe in Shepherd’s Bush. 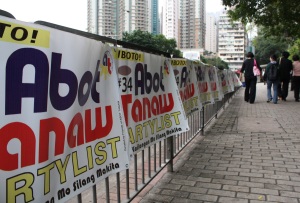 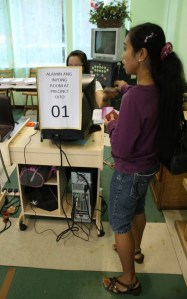 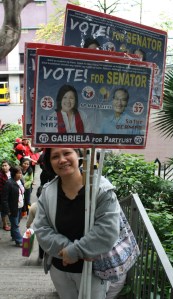 The entire content of this blog, including photos, videos, audio and text are under the following license: